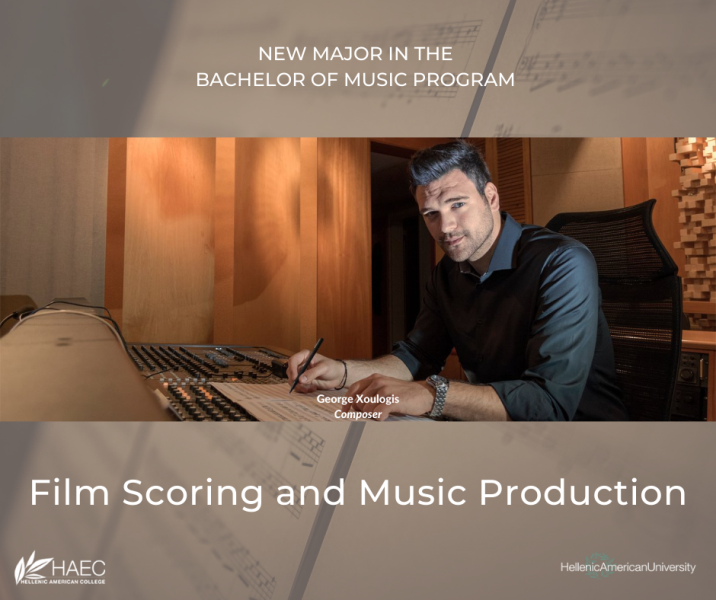 This fall marks the first classes for the University’s new major in Film Scoring. Now one of the options in the Bachelor of Music program, alongside existing tracks in Composition, Music Theory, and Performance, the major marks a new creative direction for the degree program.

The major responds to growing demand for film scorers, composers, music editors and mixers in the audiovisual sector, not only for the television and film industry, but in a vibrant game development scene. In Greece, the sector has been benefiting from recent legislation that provides financial incentives for producing films, television series, documentaries, animation, and digital games in the country.

For Ioannis Tselikas, Director of the Bachelor of Music, the Film Scoring and Music Production program gives young composers the opportunity to master both traditional compositional techniques and the new technologies related to music making. “The continuous need for music that will accompany a film, a theatrical play, or even a video game,” he says, “opens new horizons for composers to apply their art beyond the concert-hall and combine it with the fascinating world of cinematography”.

The new major arose in part out of student interest. Prof. Tselikas explains, “Many students and new applicants in the last couple of years were eager to learn more on this field. This, along with the happy coincidence of the arrival of the famous film composer George Xoulogis in the University, led to the beginning of this program.”

Mr. Xoulogis is an award-winning composer who has scored and orchestrated over 40 films, including two which premiered at the Festival de Cannes in 2013 and 2014. He has also composed music for video games, TV, and branding projects for world-renowned brands such as TEDx, Amazon, Vimeo, and Samsung.

As with degree programs and specialized tracks at the University, the Film Scoring major integrates theoretical concerns, historical and critical perspectives, and the cultivation of practical and technical skills. Students in the major acquire the ability to compose music and orchestrate for various film and TV genres and develop their craft through opportunities such as working with live orchestras and creating realistic-sounding MIDI sequences using professional-level sample libraries. Along with classes in instrumentation, orchestration, music technology, and American jazz and pop music, the major includes dedicated courses in film composition, taught by George Xoulogis.

All three programs are part of a broader University initiative to develop academic and research programs that focus on the media industry. As University Provost Dr. Themis Kaniklidou explains, these initiatives reflect the University’s desire “to unlock the creative talent of our students and to equip them for career pathways that require both their professional skills as and knowledge of the media world.”