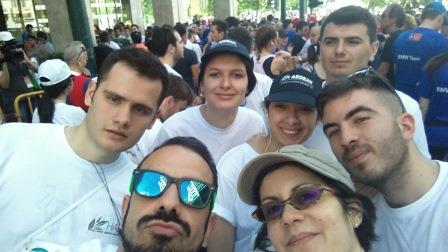 Hellenic American University faculty, staff and students took part in the recent Athens Half-Marathon on May 3, 2015 to raise money for the SOS Children's Villages. Here's Marina Tsakona and George Matzidis' account of the event:

Life today seems to be a constant race. For most of us, our parents helped us train for it so that we can compete in the final stretch. There are, however, some children who have no one or nothing to turn to for help. Organizations such as SOS Children's Villages want to change this.

And we did, too. This is why this year a group of us at the University had the idea of taking part in the 5K leg of the Athens Half-Marathon on May 3, 2015 and raising money for the SOS Children's Villages. We began talking to our fellow students about running in the race, which was a very special different kind of race, one focused on hope and the contribution we can make to our fellow human beings. It was one way of putting into practice some of the things we've learned at our University. Some of the faculty and staff joined us as well. Each of us raised money for the SOS Children's Villages from other faculty members, parents, fellow students, colleagues and friends.

We trained and prepared ourselves, and took our places at the starting line. Some of us set personal records, for others it was the first time they had raced. But in this particular Half-Marathon race there were no losers or winners—only sons and daughters of the wind, who broke the barrier of indifference.

Photo: Some of the Hellenic American University faculty, staff and students who ran in the 5K leg of the Athens Half-Marathon. Dr. Giorgos Bravos, faculty member in the B.Sc. and M.Sc. degree programs in Information Technology (not pictured) ran the half-marathon (21km).