Book presentation: Heads Out of the Sand by Thanasis Papandropoulos 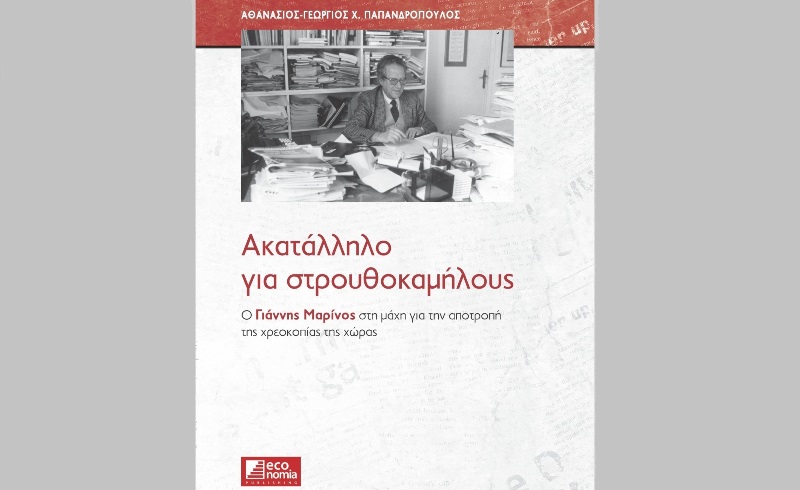 On January 21st , Hellenic American College hosts a book presentation by Thanasis Papandropoulos of the Yannis Marinos’ work “Heads Out of the Sand” with the participation of the writer.

The book Heads Out of the Sand revolves around the distinguished journalistic work of Oikonomikos Tachydromos publisher and director of 31 years Yiannis Marinos, as viewed through the eyes of his close associate, journalist and author Thanasis Papandropoulos. A living legend of frontline journalism in Greece, Yiannis Marinos has been closely monitoring the country's economy and politics, analyzing and commenting on key events from his unique, uncompromising perspective.

As mentioned on the book back cover, Yiannis Marinos repeatedly took a clear stance against the head-in-the-sand attitude that has dominated the country's public life. The book’s readers will be surprised to realize how topical and relevant articles Yiannis Marinos wrote some 30 years ago - about the country's over-indebtedness, the consequences of the education deficit, foreign policy mistakes, obstacles to entrepreneurship - still are.

The publication is enriched with rare photographic material, with a brief look at the broader history of the financial press by the researcher Theodoros Deligiannis, as well as a chronology of the main milestones of modern Greek history.

Athanasios-Georgios Papandropoulos was born in 1940 and has been active in journalism for 56 years. He studied economics, political philosophy and communication in Belgium and France and was the first Greek correspondent in Brussels on behalf of the Lambrakis Journalism Organization in 1964. He was a columnist and editor of Oikonomikos Tachydromos between 1963-1967 and 1977-2004. He has collaborated with well-known Belgian and French magazines, major Greek newspapers and has made major radio and television broadcasts (ERT, SBC TV, Channel 5, Athens 9.84). In the course of his career, he has been honored with 42 international and Greek journalism awards, is the author of six books and in 2002 was elected a member of the European Union's Informal Senate.

Image: Book cover “Heads Out of the Sand”