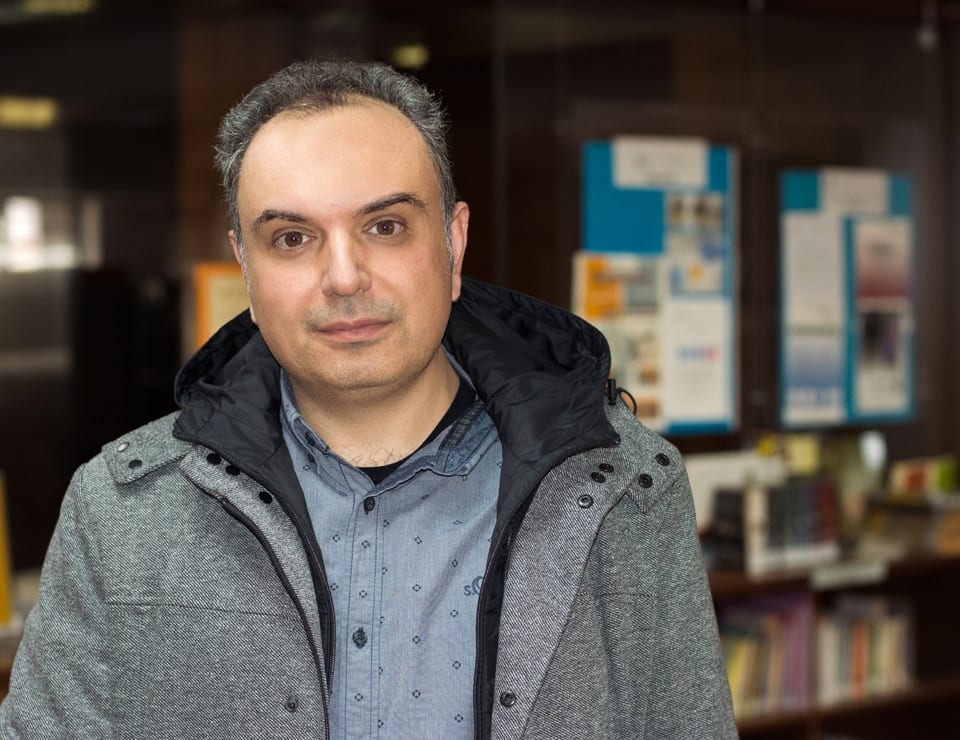 “The BAELL gives students a clear idea of each of the strands—literature, linguistics and TESOL—but also the different career paths the program opens up for them…. This balance helps students discover where their real interests are—and pursue them.”

If you’re not a student here or a fan of poetry, you may not have heard of Dr. Vasilis Manoussakis, who’s been teaching at Hellenic American College since 2013, but it’s likely you’ve seen his work before. If you’ve seen House of Cards or Lost or read the novels in George R. R. Martin’s Game of Thrones series, it’s certain that you have, since Vasilis has subtitled episodes of the former and translated some of the latter. These projects represent just a small part of his prodigious output as a translator and subtitler, a body of work which encompasses a broad range of genres, from Alexander Waugh’s intriguing biography of Wittgenstein and Diane Middlebrook’s work on Sylvia Plath to series and films produced by Disney, Universal Pictures, Warner Bros. and Netflix.

Were it not for his own creative drive, Vasilis, who holds a Ph.D. in American Poetry from the National and Kapodistrian University of Athens, might have remained the very successful practitioner he is. But Vasilis is also an artist in his own right; his published work includes three volumes of poetry, the most recent one a bilingual collection entitled Fragile Boundary, as well as essays, reviews and poems for literary magazines such as Little Red Leaves, Planodion, and the issue of Drunken Boat dedicated to contemporary Greek poets.

Not surprisingly, Vasilis’s diverse professional and creative background has informed his teaching at Hellenic American College in the Master of Translation and Master of Conference Interpreting program. As do his fellow scholar-practitioners in these and other University degree programs, he draws upon both his considerable professional expertise and his network of contacts. One prime example: fifteen students in his courses on Audio Visual Translation in the Master of Translation program are now doing work for companies in the sector after he negotiated their training with the companies’ managers in the US or Europe.

Vasilis also teaches in B.A. in English Language and Literature program. He finds the BAELL’s three-strand concept—a balance of literature, linguistics and Teaching English as a Second Language courses—benefits students, even those who begin with a specific career goal in mind.   “The program gives students a clear understanding of each strand but also of the various career paths that are possible. While many of my students begin the program thinking about becoming an English teacher, as they do their courses some wind up realizing they really love literature or translation. Besides, it’s all connected. You can’t really analyze literature, for example, without having been taught discourse analysis.”

Vasilis says he appreciates the academic freedom he has at Hellenic American College. “I like how I can use any means I choose in order to get students engaged in learning.”  These means have included inviting experts to speak to his classes, taking students in his American Poetry class to an exhibition devoted to Emily Dickinson and even creating a volunteer program for students to teach English at the Hatzikonstas orphanage. The last project was particularly rewarding—for both him personally and his students—and earned him, along with his other community outreach work, the President’s Good Steward Award. Originally, the project was a way to connect TESOL and poetry, since students were encouraged to include small bits of poetry in their teaching. Although the kids didn’t respond that well to the poetry, they did respond to the student teachers--enthusiastically. “It was great to see how our students really bonded with the kids there,” Vasilis remembers.   As he said, “it’s all connected.” Just sometimes in ways we never expected.