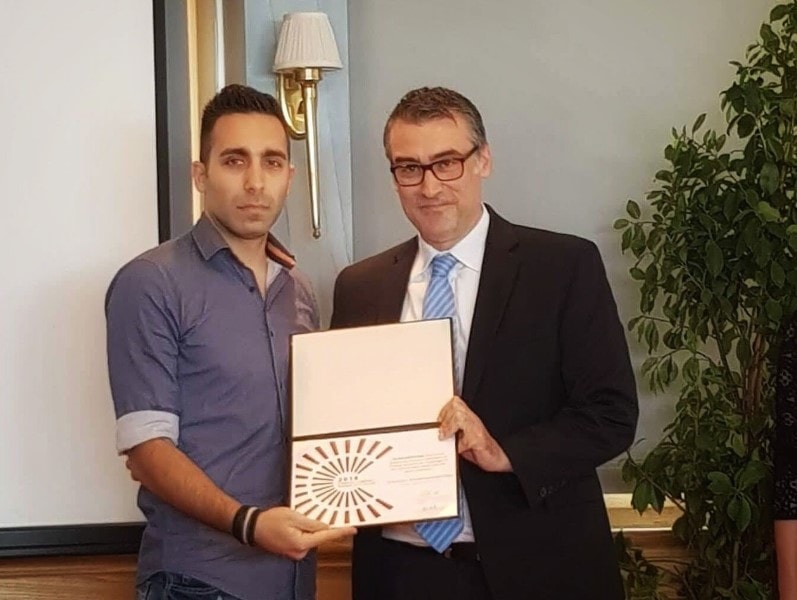 Campus Compact, a Boston-based non-profit organization working to advance the public purposes of higher education, has announced the 268 students who will make up the organization’s 2018 cohort of Newman Civic Fellows, including Hellenic American University’s own Christos Venetsanopoulos.

Christos is in his junior year of studies in the BAELL program, which he’s pursuing alongside a minor in Psychology. A recipient of a 2017 New Hampshire Presidents’ Leadership Award for his contributions to community service, he serves as Vice President of the Student Council and assistant in the Office of Student Affairs and International Programs. Christos has been an enthusiastic advocate of the College’s outreach work; among his contributions has been teaching IT skills to the elderly and English to orphaned children. In the words of University President Leonidas Koskos, Christos has demonstrated “exemplary commitment to the civic engagement projects undertaken by our community.”

The Newman Civic Fellowship, named for Campus Compact co-founder Frank Newman, is a one-year experience emphasizing personal, professional, and civic growth. Through the fellowship, Campus Compact provides a variety of learning and networking opportunities, including a national conference of Newman Civic Fellows in partnership with the Edward M. Kennedy Institute for the United States Senate. The fellowship also provides fellows with access to apply for exclusive scholarship and post-graduate opportunities.

“We are thrilled to have the opportunity to celebrate and engage with such an extraordinary group of students,” said Campus Compact president Andrew Seligsohn. “The stories of this year's Newman Civic Fellows make clear that they are bringing people together in their communities to solve pressing problems. That is what Campus Compact is about, and it's what our country and our world desperately need.”

The Newman Civic Fellowship is supported by the KPMG Foundation and Newman’s own Foundation.