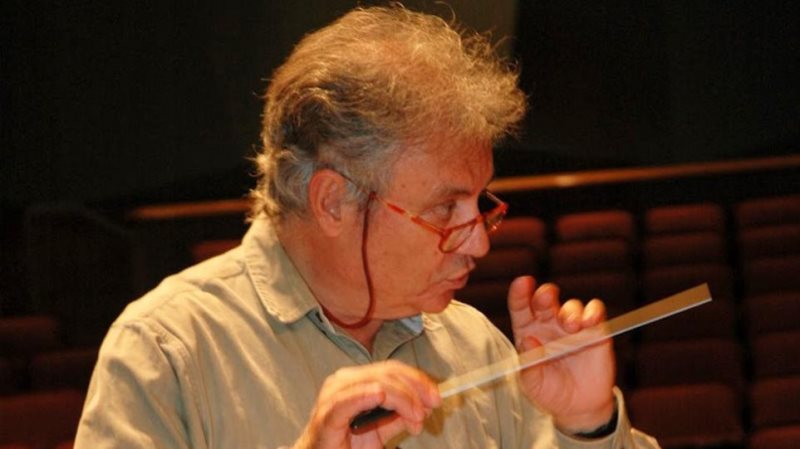 Talent creates obligations and duties. Talent oblige, just as aristocratic birth or a title of nobility does. Or property, if we look to the Weimar Constitution.

And Theodoros Antoniou was undoubtedly a man of great talent. His work, his life, his character, however, cannot be viewed as the fulfillment of some duty toward his talent. Thodoros Antoniou was not a solider of duty. He was the personification of generosity. Generosity is a key term in understanding Thodoros Antoniou. By this, I mean a generosity of intellect and spirit, but also a physical generosity—when one considers the energy he radiated.

Generosity explains the voluminous corpus of his works. His dedication to promoting new composers. His persistent presentation of works of Greek composers. His fervor as President of the Union of Greek Musicians.

Generosity, too, defined his role as teacher and mentor. Thodoros Antoniou was not only a teacher in the halls of conservatories and universities but also a mentor for orchestral musicians as he guided them through the labyrinthine compositions of contemporary music, for which their musical education had left them unprepared. He was a composer who explored the possibilities of nearly every orchestral instrument, a mentor who opened new horizons for the performer.

With his teaching he also offered horizons and opportunities to his students at Stanford, Boston University and Hellenic American University/Hellenic American College. He encouraged them to compose in whatever form of music, use whatever kind of musical idiom and follow whatever school or direction they wished. He taught them freedom.

Thodoros Antoniou was generous because he was free. He was aware that as a composer he participated in a small part of the musical universe. He sought to equip his students with the knowledge that would enable them to join other parts of this universe. Without dogmatism or exclusionary boundaries, he gave of himself freely to his students. With the same generosity Thodoros Antoniou sought to secure the recognition of composers from other currents of music, without condescension or a desire to exclude anyone.

Generosity led to his friendship with Manos Hatzidakis, another generous man of music, Generosity made Thodoros loved and respected among the legends of contemporary music, even those who lacked this gift themselves. It is not by coincidence that Thodoros saw in Dimitris Mitropoulous a model for the artist and human being and dedicated to him the opening address he delivered to the Academy of Athens.

I will not speak here of the unstinting financial support he gave to individuals and organizations in the world of music and in art in general. He who had restricted his material needs to the barest minimum was a steadfast patron of persons and initiatives, and this too out of generosity of spirit. In this world, in this life, Thodoros Antoniou had earned his induction “in the tabernacles of the righteous”. Because he loved music so much. Because he offered so much to so many.

Thodoros, my friend, I am grateful to you and I salute you.